Exeter, Bath and Bristol. These are the three places we promoted Dopplle at.
Exeter was our first Freshers’ Fair on Saturday the 21st of September, and we were a bit underprepared… I was still ironing the word ‘Dopplle’ onto our promoting t-shirts the night before. Jess and Arpi also helped me out on the stand and being the social butterflies they are, it felt as if half of the University came up to the stall just to have a chat with them. Once we had settled and started talking to the freshers, we also realised that the stand next to ours caused a massive influx of traffic which benefited us greatly.

This was the Sexual Health stand. Having the Sexual Health stand on our left meant that after receiving a bag of free condoms and some glittery sperm keyrings, the freshers were ready to hear about how they can live more sustainably by being encouraged to swap clothes within the University. The most exciting and unexpected part of the day was when Altr.d, Exeter Fashion Society and some members of the Exeter Student Guild asked if in the future we could collaborate and do a swap shop with them on campus!

After a long day and losing our voices several times over, we happily packed up our stand and our collection of 29 glittery sperm keyrings, then went home for a glass (bottle) of wine. No rest for the wicked though, as that evening we headed over to the iconic Exeter Cathedral to watch The Slow Fashion Show which was being run by InExeter and Sanchos. This whole evening was again promoting sustainable living through fashion, and we were so excited to be a part of it! There might be a blog post about that at a later date, so keep your eyes peeled! 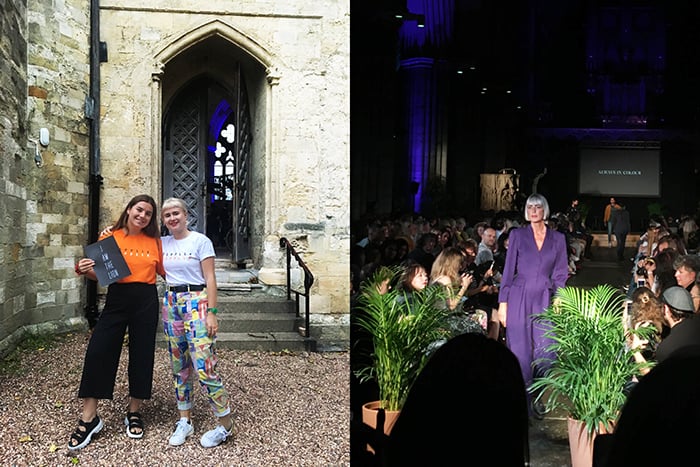 The second Freshers’ Fair that Dopplle attended was the Bath Freshers’ Fair on Friday the 27th of September. This was also the same day as the Bristol Freshers Fair but we managed to get to both. Bath was extremely nerve-racking as it was in front of my peers (aka the people I have been going on nights out with for the past two years at University). The banner, that was meant to be the focal point for our stall, also had not arrived and after a nice email that I received at 6 am that morning, we realised that it would never arrive due to a printing error. Lovely. Not letting this affect us, we had to improvise and do a quick bit of DIY (buying some card and writing on it) to get our point across.

Eileen was helping out at the stand too that day and used her years and years of knowledge and wisdom (she is a PhD student) to attract freshers so they would listen to what Dopplle had to say. Again, we met so many interesting people, including some very keen freshers who want to get even more involved with Dopplle by writing some blog posts for us!  Once we packed up, we had a call with the Dopplle members who were promoting at the Bristol Freshers Fair (and not being able to be in two places at once, we had to recruit someone else – my father). 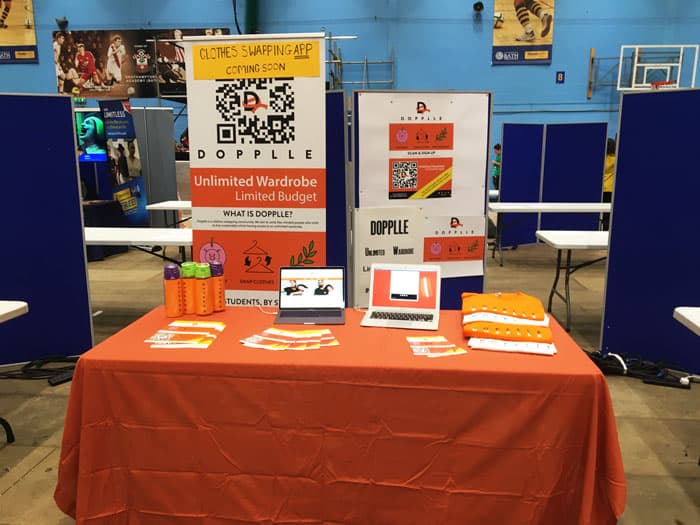 Bristol was an “indoor” Freshers’ Fair , but that was a loose term. It was inside a tent yes, but the torrential rain and wind made it feel like they were camping. Ashlea, Shannon and my father came armed with flyers and posters, with the weather not stopping them one bit. Robert was the only 50+ year old man – sorry Dad – wearing a bright orange t-shirt, so you can imagine how much he stood out in a crowd. Unlike the banner fiasco with Bath, Bristol managed to get theirs from the local park’s cafe (Café Retreat – Bristol) who kindly offered to take our delivery.

The day ended up being divided up into three types of promoting as the team adapted to the huge crowds generated by their neighbours National Express and Subway. Again more proof Freshers only want one thing – free stuff. In this case it was a free National Express trip or free Subway vouchers. The first few hours of the Fair were when we gave the Freshers our undivided attention while we gave a thorough explanation of Dopplle. 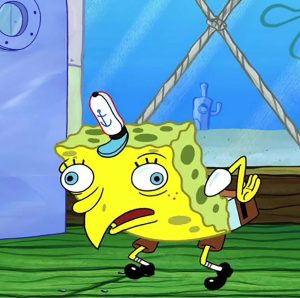 As lunch arrived, others decided to break some rules, so we joined in. “ You cannot advertise outside of your allocated space” or in this case “YoU caNnOT aDVeRtiSe ouTsiDE oF YouR AllOcAteD sPaCe” was ignored and the girls were dispatched to chat up/engage with some silly Freshers who were lost in the long queues for the National Express offers. Finally, as the end was in sight, Dopplle members decided to distribute as many leaflets as possible to unsuspecting Fresh still queueing for the National Express stand. Even though it was winter-like weather and 70% of them were probably hungover, this did not slow down the Freshers from coming to the Fair. This was impressive but the promise of free stuff is what drove them to walk up the hill to the marquee.

In our opinion, promoting at the Freshers’ Fairs were a success leading to many possible opportunities which we cannot wait to share with you. If you want to get in contact with us about anything, from writing blog posts to just wanting to find out more about Dopplle, please just message us on hello@dopplle.com ! 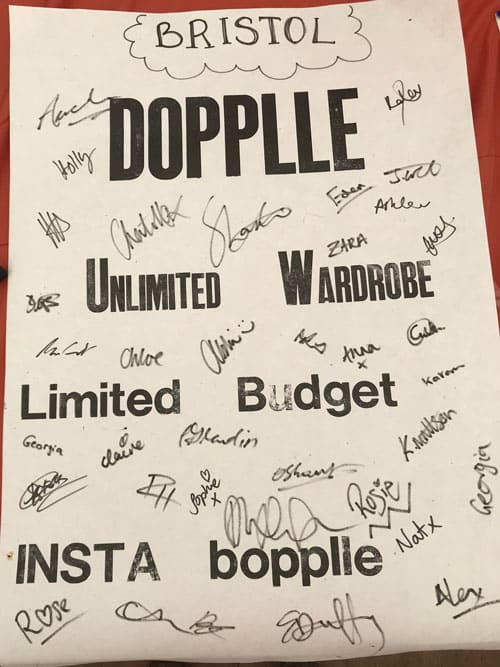