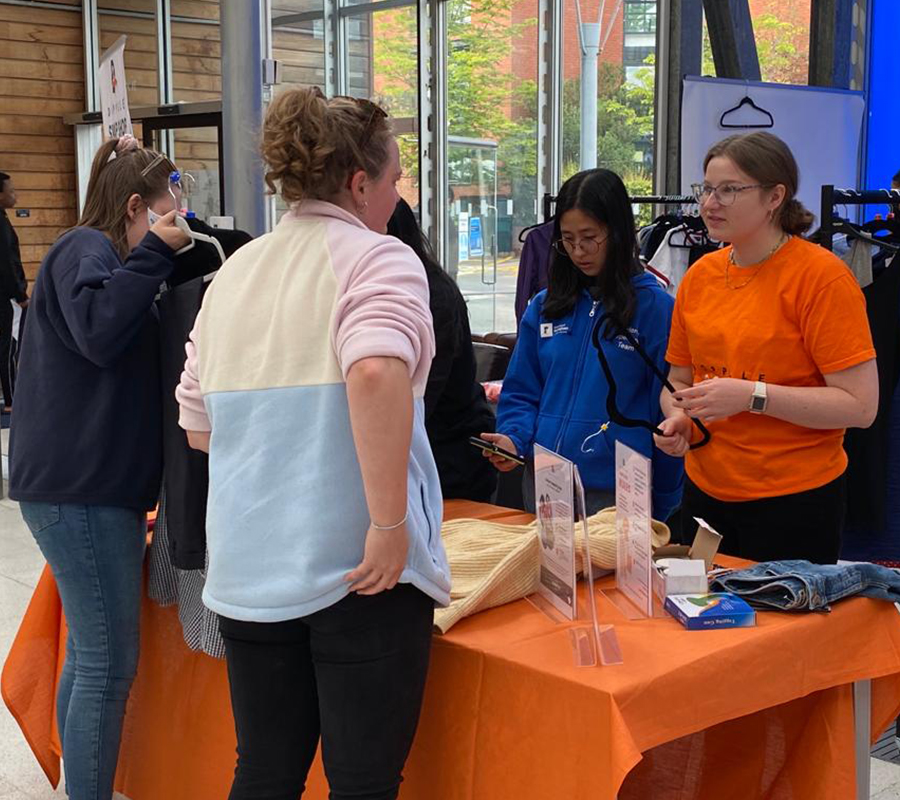 The Dopplle Swap Shop event at the Jubilee Campus, being run for a second time, took part early evening in the Atrium.  We arrived about an hour and a half before the 5pm start time and were assisted by four RAs to move the clothes and rails from the parking area to the space.

The location of the swap shop at the main entrance to the dining room allowed Dopplle to showcase the event to the students who were arriving for dinner.  Based on past feedback the event was timed to coincide with dinnertime which meant that despite the fact many students had returned home, it produced a huge amount of engagement with students, with lots of positive feedback and of course swapping of clothes!

With nearly 10 rails displaying over 500 items of clothing,  setup was quicker as the layout of the room had already been proven at the last event.  In addition to the clothes, we brought an extensive range of supporting items including two pop-up tents and a number of Dopplle banners. For the first time we had the ability to sell clothes, meaning that students had more choice if they did not have clothes to swap.

The event itself was immediately busy when it opened at 5pm, with students arriving with clothes in advance having heard that the event was running. As a second event we had quite a few returners from the previous UP/Jubilee swap shops in March. People were particularly pleased to see that they were still able to spend their unused Dopplle coins from previous events. With a large selection of clothes laid out in a logical manner, and with sizing cubes (a new addition) helping guide people to the best items, people generally stayed for over half an hour on average.

At the end of the swap shop everything was re-packed in our cars by 9pm with the help of fantastic the RAs.

In total 48 swaps were recorded, meaning on average an item of clothes changed hands every two minutes or so that the event was open between 5 and 7 pm!  We had six returning Dopplle users and five new users.  Finally our estimated engagement with the brand was 50 recorded students on the stand and we estimate 150 who saw the Dopplle banners and the stand!  This was due to running the event in the Atrium, meaning that roughly every minute a student was exposed to Dopplle and swap shops!

Although this event was run when many students were away from campus, there is immense potential at the Jubilee site with many people coming to the stand to see what it was all about. The success of the other events Dopplle ran at Nottingham, in particular the one at SB on its third swap shop, shows that to get growth with any event, you have to continue to run them on a regular basis with a forward plan of advertising and general marketing.  It is recommended that a swap shop week is run at Nottingham every term, with co-ordination between the accommodation and campuses, ensuring that it becomes a regular part of the ResX and student social calendar.